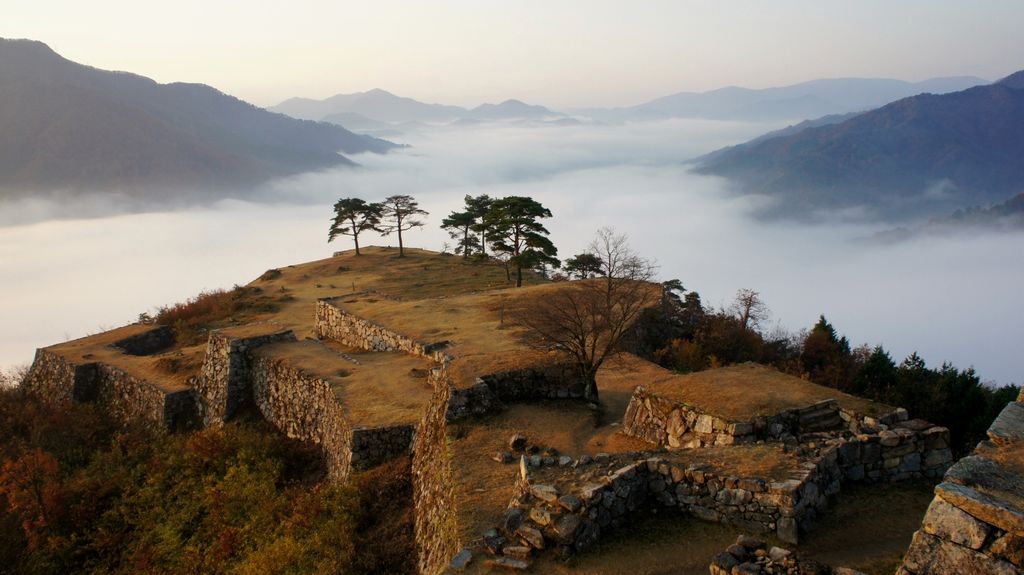 A stunning set of castle ruins in a wonderful location high in the mountains.

Takeda Castle Ruins「竹田城跡」located in Asago City, about 70 kilometers north of Himeji of Hyogo Prefecture is often called as the “Castle floating in the sky” or the “Machu Picchu of Japan” because of its beautiful location 353 meters above sea level, high in the mountains and It appears to be floating on a sea of clouds on foggy autumn mornings. The castle is also known as Torafushi-jo (Lying Tiger Castle) due to its layout resembling a lying tiger.

Takeda Castle was originally built as Izushi Castle in 1411 by Otagaki Mitsukage and was later conquered by Toyotomi Hideyoshi. After the great samurai battle of Sekigahara in 1600, the castle was abandoned when the last lord of the castle was forced to commit “Harakiri”, ritual suicide.

The castle gradually broken down over the centuries until the ruins were restored in the 1970s and 80s. Unfortunately, buildings are no longer standing on the grounds, however an extensive foundations and stone walls of the castle remain on the grounds.

Visitors can be amazed by all those stones on the top of the mountains lifted up without modern equipment.

There are various spots around the grounds with impressive 360 degree panoramic views. Visitors can also enjoy seeing the layout and style of the ruins very remindful of the majestic mountain ruins of the Inca site Machu Picchu in Peru.

The ruins are especially stunning when the clouds roll in making them look to be floating in the sky.

The best time to see the castle floating in the sky is in Autumn between October and November around sunrise, 6:00 to 6:30 a.m. when the morning mist and fog creates a sea of clouds on a clear day. A sea of clouds can be seen only with the right weather conditions on one out three mornings on average. It’s the natural phenomenon, so you can not expect to see it every day

One of the best viewing spot to enjoy the amazing view of the castle floating in the sky, is from Ritsuunkyo on the mountain slopes opposite the castle. However, there is no easy access by public transportation, instead of the car park at the trailhead. It is possible to reach by car or taxi. You can also reach in 45-minute walk from JR Takeda station. The lower viewpoint can be reached in a few steps from the car park , but the best views are at up the trail in 30-40 minutes walk.

Whether you visit Takeda Castle Ruins or Ritsuunkyo that you can only reach them via a mountain trail, so the appropriate shoes and clothing are required to hike up the mountain.

You can reach the castle on foot by two mountain trails from the back of Takeda Station in 40-minute.

The Tenku Bus runs every one hour from March through November between Takeda Station and the Takedajo-seki bus stop (20 minutes, 260 yen one way or 500 yen for a 1-day pass). From the bus stop, 20 minute walk to the castle entrance.

You can also take a taxi from Takeda Station to the trailhead to Takeda Castle (near the Takedajo-seki bus stop) at around 2000 yen. From there, 20 minute walk to the castle entrance.