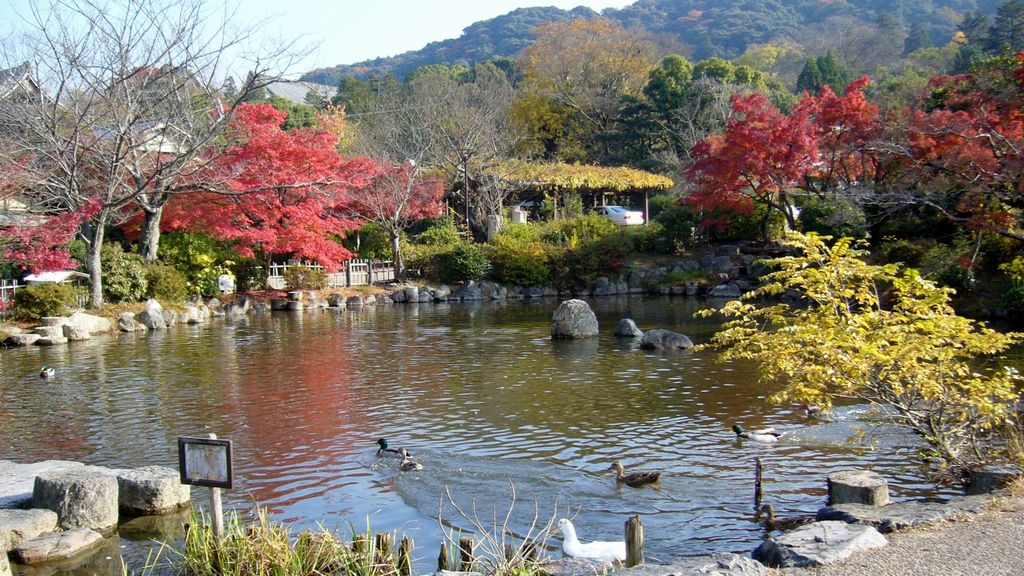 A large weeping cherry tree stands in the peaceful park in the Higashiyama, Kyoto.

Maruyama Park, Maruyama Koen is a public park behind Yasaka Shrine in the Higashiyama District in Kyoto. The park is popular for both locals and visitors to escape the hustle and bustle of the city centre and stroll peaceful paths around gardens, ponds.

Maruyama Park is one of the best spots for cherry blossom viewing. In early April, when the cherry trees are in full bloom, the calm atmosphere is changed and the park become very busy with people enjoying themselves drinking beer and sake under the hundreds of cherry trees until late in the night.

A large weeping cherry tree stands at the center of the park. This symbolic tree is one of the most beautiful sights in Kyoto, particularly when gets lit up in the night.

The park has several ponds and beautiful bridges. There are outstanding statues of Sakamoto Ryoma and Nakaoka Shintaro, two samurai activists, who were both assassinated in Kyoto during efforts to abolish the Tokugawa shogunate in 1867.
The park has a number of snack shops as well as the Michelin starred Mizai restaurant.

The northern entrance to the park leads directly to Chion-in Temple and the west entrance leads to Yasaka Shrine.

Access : 10-minute walk from Gion-Shijo station on the Keihan line.