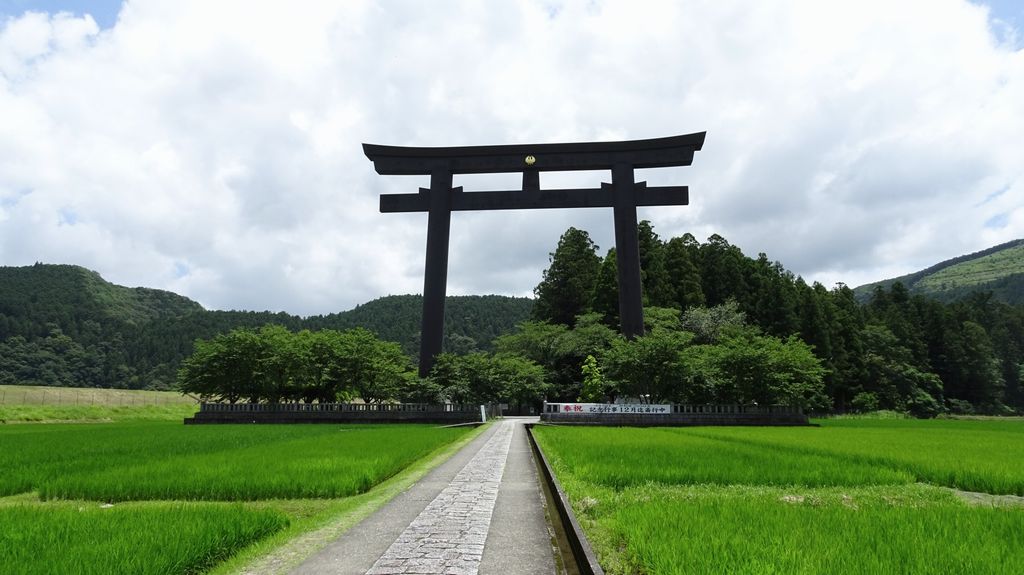 A sacred shrine with the biggest torii gate is the spiritual heart of Kumano.

Kumano Hongu Taisha「熊野本宮大社」, one of the three grand shrines of Kumano, a World Heritage registered shrine is located at the center of the Kumano Kodo pilgrimage routes in the rugged mountains of southeastern Wakayama.

Kumano Hongu Taishaku is the head shrine of over 3,000 Kumano shrines across the country. It enshrines the sun goddess Amaterasu and the deities of the other two Kumano shrines, Hayatama Taisha and Nachi Taisha.

These three Grand Shrines used to have their own different form of nature worship, and they started to be worshipped as a set under the influence of Buddhism in the 10th century.

It is said that Kumano Hongu Taisha was established in the 9th century and was moved to its current site from a 500 meters northwest of the original location at Oyu no hara, a delta at the confluence of the Kumano-gawa and Otonashi-gawa Rivers due to the flood in 1889. There is the biggest torii gate in the world at 33 meters tall at Oyu no hara.

In the 11th century those three Grand Shrines became a pilgrimage destination among the imperial family and aristocrats. By the late 15th century, the pilgrims to Kumano became very popular and so many people visited this area referring to ancient processions to Kumano. Until now, The Kumano area is considered as a sacred place and the spiritual heart of Japan.

When you visit Hongu Taisha, you may find all kind of the symbolic crow with three legs, called “Yatagarasu” tributes from statues, flags to amulets.
In Japanese myth, when Jimmu, Japan’s legendary first Emperor marched from Kumano to Asuka in 660 B.C, Yatagarasu guided him across the steep mountains.
So it became the symbol of Kumano area.

Incidentally, the figure of Yatagarasu has been used as the symbol of Japan Football Association since 1931, and you can see it on the jersey of Japan national football team.

Anyone can experience the spiritual countryside of Japan by walking these ancient Kumano Kodo routes.

Hongu Taisha is located at the center of the Kumano Kodo network of pilgrimage routes.  The final section of the Nakahechi route between Hosshinmon Oji and Hongu, seven kilometers long is an enjoyable walk for visitors who wish to experience the ancient Kumano Kodo pilgrimage trail. It takes about two hours and finishes at Hongu Taisha.

There are three Onsen hot springs in the Hongu area. Each of them have own unique history and atmosphere.

Wataze Onsen is known for having one of the largest outdoor baths in Japan.

Yunomine Onsen has over 1,800 years history.  One of its baths, the small Tsuboyu bath is the World Herritage registered hot spring in the world that you can actually bath in. It’s also famous for its healing powers.

Kawayu Onsen is a unique hot spring town located along a river.  In the summer, you can dig a hole in the riverbank then hot water flows. With cool river water, you can make your own bath. During the winter the riverbank is transformed into the giant public outdoor bath called Sennin-buro for free public use.

Hosshinmon Oji and those three hot springs can be reached by bus.

From Kii-Tanabe station on the JR Kisei main line

Buses run for Hongu Taisha approximately every two hours. The one way trip takes two hours and costs 2060 yen. Some buses continue from Hongu to Hosshinmon Oji, the starting point of an enjoyable two hour walk along the Nakahechi pilgrimage route to Hongu Taisha. The most of buses stop at the three hot springs of Kawayu, Wataze and Yunomine Onsen before arriving at Hongu Taisha.

From Shingu Station on the JR Kisei main line

Buses run for Hongu Taisha approximately every one hour. The one way trip takes 80 minutes and costs 1540 yen. The most of buses stop at the three hot springs of Kawayu, Wataze and Yunomine Onsen before arriving at Hongu Taisha.