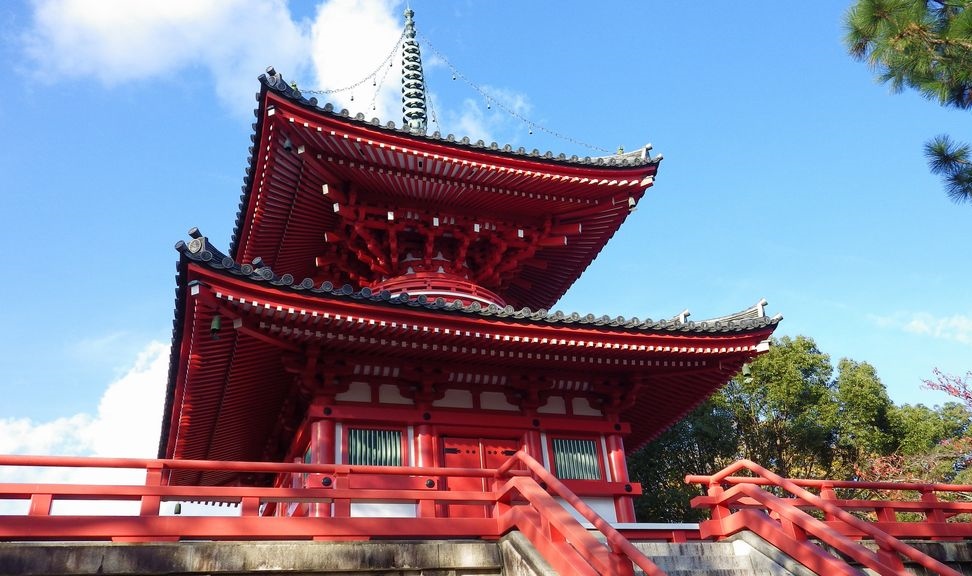 Daikaku-ji Temple is a large temple located in the northern part of Kyoto, Sagano district. It was originally built in the early 800s as the detached palace of Emperor Saga, who thoroughly enjoyed spending time in this calm area on the outskirts of Kyoto. The Shinden (palace for the emperors daily use) has been designated an Important Cultural Property by the Japanese government, and the entire temple grounds are also designated a national historic site.

Thirty years after the emperor’s death, the palace was converted into a temple and has since been one of the highest ranked temples of Shingon Buddhism.

The Shingyo Pagoda, a two tiered, tahoto style pagoda erected to commemorate the 1150th anniversary of Emperor Saga writing the Heart Sutra, populate the garden grounds and are connected by a network of walking paths. Visitors can walk around the garden, visit the buildings and enjoy the natural scenery around the pond. The garden is especially popular during the cherry blossom and autumn color seasons.

About 200 plum trees are planted on the temple ground.

The trees  begin flowering late from the middle of March.

Moon-viewing festival started when Emperor Saga floated a boat on the Osawa-no-ike Pond on the night of the full moon nearest the Autumn Equinox, and had a party. Visitors can see both the brilliant full moon in the night sky and the reflection on the pond.

Autumn color illumination is held at Daikaku-ji Temple in Arashiyama. The reflection of Shingyo Hoto pagoda and autumn leaves on the Osawa-no-ike pond’s surface are so beautiful and creates a fantastic atmosphere.