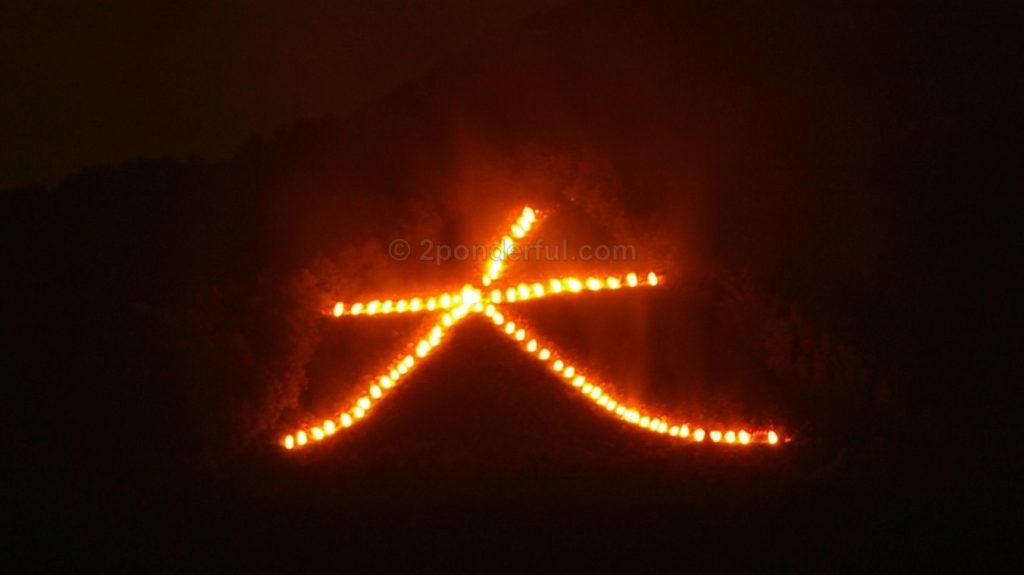 “Daimonji Gozan Okuribi” is the Buddhist festival of the feast of our ancestors. Known as “the Bon festival”, it is held on the evening(20:00 P.M) of August 16th. Gigantic Kanji characters and other motifs are lit on the five mountains surrounding the city of Kyoto. Now It is a famous as the Kyoto summer image. This Buddhist custom has evolved into a family reunion holiday during which people return to their family’s ancestral places. Once there, they visit and clean their ancestors’ graves for when the spirits of their ancestors revisit earth. These Bon fires are intended to see off the spirits as they return to the other world.

The best viewing spot for

●the character “dai”「大」 at Daimonji is on the Kamogawa River bank [Map-A].

●From the highest point of Funaokayama Park (free entry), One of the best viewing spots, you can have a panoramic view of all the mountains without the torii-gata motif [Map-H].

To see all of them, you need to get a paid-seat at high-rise buildings in the downtown area such as hotel’s top floor restaurant, department stores. They often advertise these as “Daimonji Specials.”

You can only see the “dai” from here, though It’s kinda fun to sit on the grass in the dark with other people of all ages, some wearing yukata.