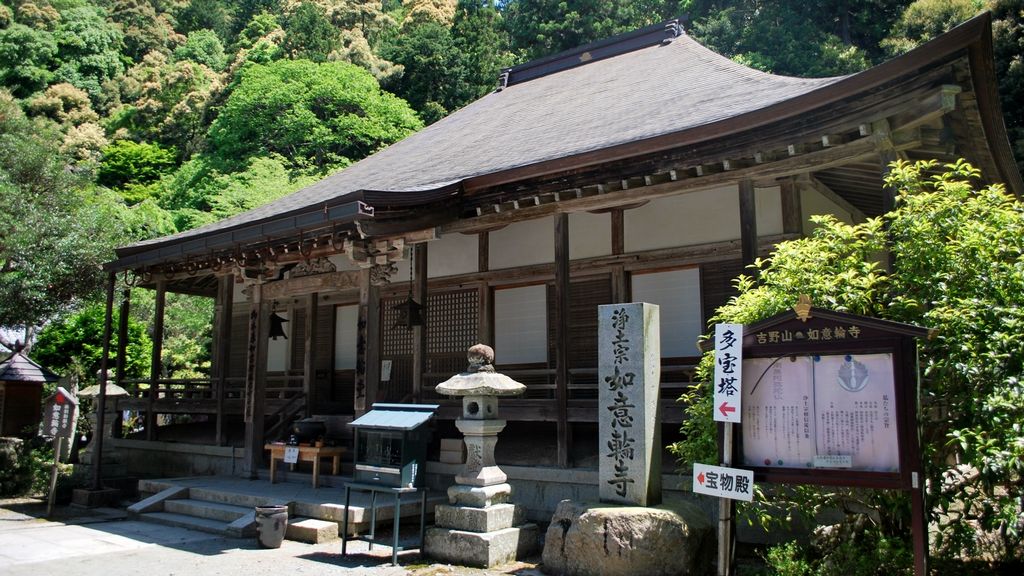 A quiet temple in Mt. Yoshino has the tomb of the emperor, tells us the fleeing nature of this life.

Nyoirin-ji Temple was originally established more than 1100 years ago.  The Temple is a quiet, medium sized temple of the Jodo sect of Japanese Buddhism, located on Mt. Yoshino’s slope opposite the town.  Nyoirin-ji Temple was where Emperor Godaigo worshipped after he transfered the capital to Yoshino. He prayed for blessing to the country and prosperity of his descendents.

The hill behind the temple holds the tomb of the emperor.  In the temple grounds, there are his and his wife’s mausoleum.

Matsuo Basho (1644-1694), a famous “haiku” poet in the Edo Period (1603-1868), visited the temple and wrote many haiku thinking about the political trouble in the far back and dramas of people involved.

Nyoirin-ji Temple also has other buildings including a “tahoto” style pagoda and a treasure house. The treasure house displays mandala, religious objects and artifacts from the Emperor Godaigo’s court.  Also several collection of articles related to the emperor.

Access : Nyoirin-ji Temple is a bit away from the major Yoshino’s sites on the opposite slope of the valley. It can be reached on foot in about 45 minutes from Yoshinoyama station on the Yoshino Ropeway, or in about 20 minutes from the Nakasenbon Koen Bus stop halfway up the mountain.

To get to Yoshino, Take the Kintetsu Yoshino line