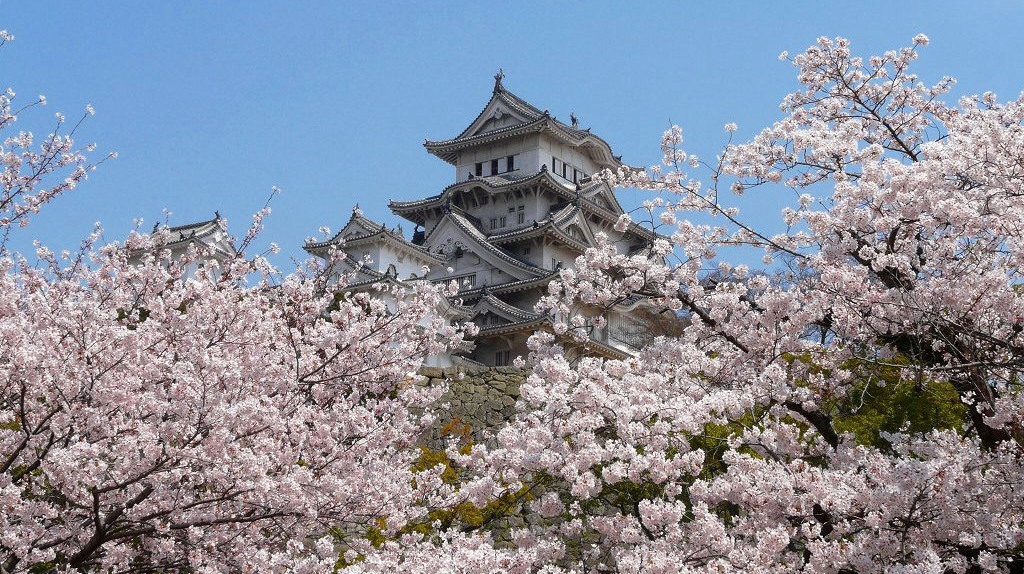 The striking white edifice Castle is considered the most beautiful castle

Himeji Castle was constructed in the mid-14th century, and a three-layer castle tower was built by Toyotomi Hideyoshi in the 16th century. Ikeda Terumasa, a feudal Lord of the castle, remodelled it in the 17th century. Its figure was likened to a white heron spreading its wings, and thus also became known as White Heron Castle. This striking white edifice is generally considered the most beautiful of Japan’s castles and is one of the few that has escaped the ravages of civil war, earthquakes and firebombings. Renovation was completed in 2015.

Visitors can enjoy the seasonal changes with a pond with a waterfall against the scenery of the castle, a tea garden where visitors can enjoy green tea, a pine tree garden, a bamboo garden and a flower garden. It’s also famous for autumn colors.

Nishinomaru garden at night with the special illuminated cherry trees.
The scenery of the striking white castle and the cherry trees is truly beautiful.

“Kangetsu-kai”, the annual Himeji Moon-viewing festival is on. Between the summer heat and autumn colors,  tsukimi 「月見」, or moon viewing, is also an important point in the Japanese calendar. Visitors can see beautiful Himeji Castle lit-up under the brilliant full moon in the night sky while having a picnic meal and a few drinks with friends.

The annual Himeji Pottery Market gathers japanese traditional pottery and ceramics from across the country to display their wares for sale. You can find famous Japanese potteries cheaper than the market price, such as Kiyomizu(Kyoto-style pottery), Arita, Karatsu, Shigaraki, Imari and others.