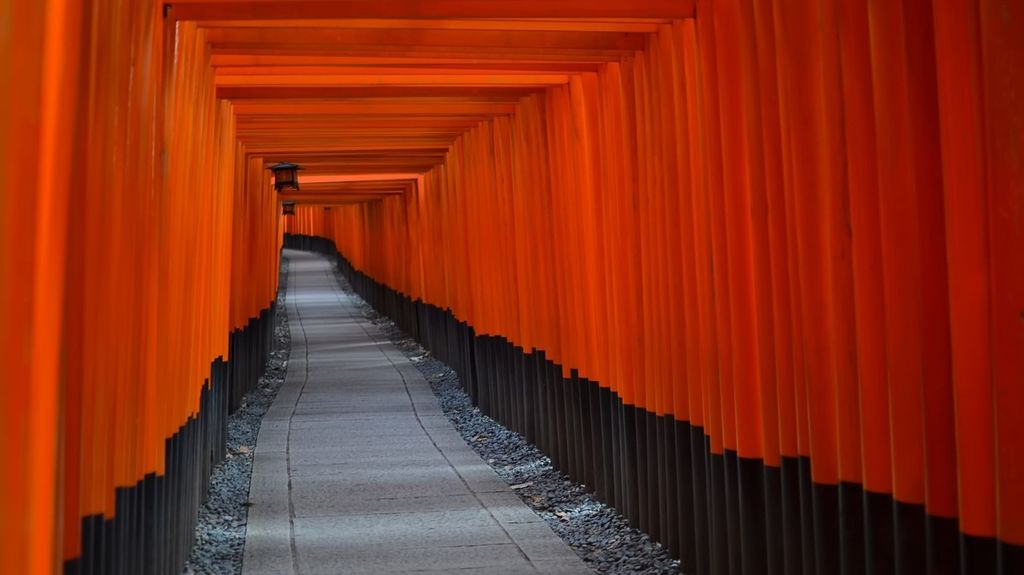 Fushimi Inari-taisha Shrine is located on the mountain of Inari-san in Fushimi, Kyoto. The shrine is one of Kyoto’s most popular spots among tourists from overseas.  Fushimi Inari is the head shrine of more than 30,000 shrines around Japan dedicated to “Inari”, the Shinto god of rice since ancient times, and the shrine was founded in 711. The red gates are known as “torii” and they were considered the boundary between the world of humanity. The shrine is famous for its tunnel of torii gates each of which was donated by a shrine visitor hoping for divine intervention from Inari and is also famous for its fox statues. Foxes are thought to be Inari’s messengers, resulting in many fox statues across the shrine grounds.

While the primary reason most foreign visitors come to Fushimi Inari is to explore the mountain trails, the shrine buildings themselves are also attractive and worth a visit.  At the very back of the shrine’s main grounds is the entrance to the torii gate covered hiking trail, which starts with two dense, parallel rows of gates called “Senbon Torii ” (thousands of torii gates).

The hike to the summit of the mountain and back takes about 2-3 hours.  There are multiple smaller shrines with stacks of miniature torii gates. After about a 30-45 minute ascent and a gradual decrease in the density of torii gates, visitors will reach the Yotsu-tsuji intersection roughly half way up the mountain, where some nice views over Kyoto can be enjoyed, and the trail splits into a circular route to the summit.

Admission : Free in the shrine precincts

Open : Open through the year

This two days festival is a lively. Thousands of lanterns in the ground and Mt. Inari are lit up for celebration.  Starting from the evening of Yoi-miya, thousands of stone and wood lanterns all over Mt. Inari will be lit up, and donated lanterns will also be hung on the paths throughout the shrine. Throughout those two days various performances are takes place, including taiko drum concerts and dance exhibitions.

Tens of thousands of the ritual tossing prayer sticks gathered from around Japan are burned in bonfires in appreciation of the abundant harvest, to purify one’s transgressions and reduce obstacles, and to pray for one health and happiness.