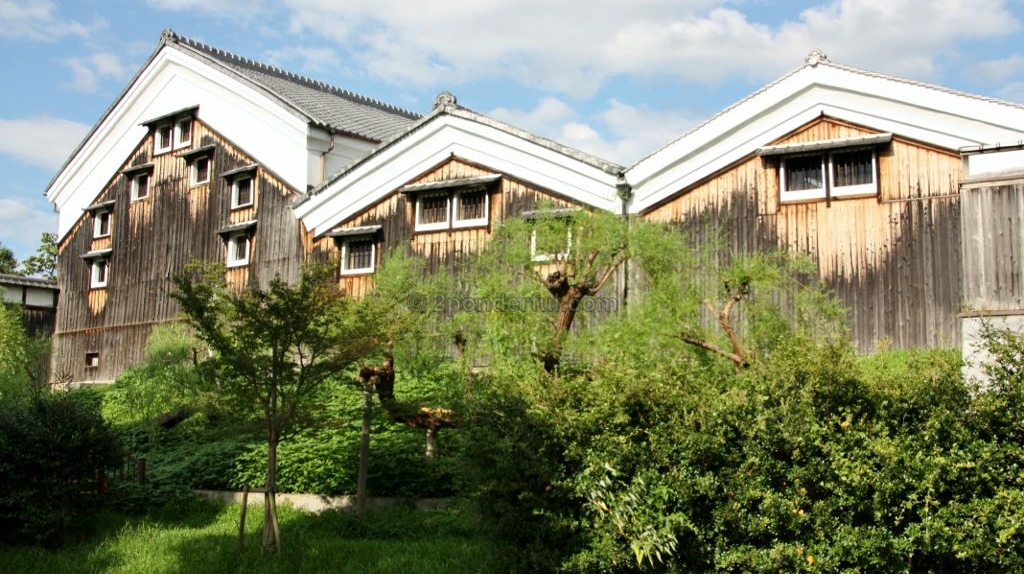 Fushimi is developed as a castle town in the sixteenth century and is now best known for its sake production.

No, not the famous shrine and torii gate complex Fushimi Inari Taisha; that beautiful place – not too far away – is far from quiet these days! This is Fushimi, which developed as a castle town in the sixteenth century but is now best known for its sake production. The old name for the town was Fushimizu – underground water emerging from a spring. The secret of the delicious sake that the town is famous for is said to be the quality of the spring water. Water was doubly important for this town: both for sake production and for transporting goods along its canal.

The main places of interest in Fushimi can be covered in half a day. After an early morning visit to Fushimi Inari Taisha (very important if you wish to avoid the tour groups) take the Keihan sub-express train for the fifteen minute ride to Chushojima and take the north exit.

Upon exiting the station, you will see the first of numerous images of Sakamoto Ryoma (1836-1867), a legendary samurai who was part of the movement trying to overthrow the Tokugawa shogunate. He survived an assassination attempt whilst staying at the town’s Teradaya inn. Head down the small shopping street opposite the station and take the small lane on the right that leads to Chokenji temple. The rust-coloured walls of the temple are visible from the shopping street.

This small temple was dedicated in 1699 to the goddess Benzaiten. She is the deity of music and water and is one of the seven gods of fortune who bestow happiness, wisdom and wealth. Naturally, those who rely on water for trade – such as sake producers – pray for prosperity at the temple and you will see several sake containers both outside of the gates and inside the grounds.After visiting the temple, you have a choice: a canal cruise or a stroll along the willow tree-lined banks of the canal.

This small temple was dedicated in 1699 to the goddess Benzaiten. She is the deity of music and water and is one of the seven gods of fortune who bestow happiness, wisdom and wealth. Naturally, those who rely on water for trade – such as sake producers – pray for prosperity at the temple and you will see several sake containers both outside of the gates and inside the grounds.After visiting the temple, you have a choice: a canal cruise or a stroll along the willow tree-lined banks of the canal.
Hours : 08:00-17:00 Admission : no charge

Fushimi port and the canal system was originally constructed in 1594 for the transportation of the materials needed to build Fushimi Castle. At that time, the canal banks were lined with trade shops, inns and sake breweries. Flat-bottomed boats transported goods such as rice, wood, sake and charcoal between Fushimi and Osaka.

From outside of Chokenji temple, cross the bride and buy your ticket at the launch on the canal bank. A 55-minute cruise takes you down to the lock and museum and back again. In spring, the canal banks will be lined with cherry blossom, in summer, hydrangeas and in autumn, red maple leaves.

If the next cruise is not for a while and you don’t want to hang around, it is very pleasant to walk along the canal instead. There are several benches from which to admire the view of the old sake breweries or eat a packed lunch. Facing the canal, walk left and follow the canal for about one kilometer until you reach a small park where three tributaries meet. From here, you can take a small diversion to Matsumoto brewery or head into the historical town centre.

Founded in 1791, and designated a heritage site by the Japanese government, the striking exterior of this building is especially recommended in late spring when the oil seed rape surrounding the brewery is in blossom. Their Momo no Shizuku sake is well-known throughout Japan.

Heading into town, you can discover the reason that Ryoma Sakamoto is synonymous with Fushimi, stop for refreshments and take a tour of a sake brewery and taste some of its products.

On your stroll along the canal side, you would have noticed the statues of Ryoma and his wife Oryo. In 1866, Ryoma was staying at the Teradaya Inn. Oryo, a servant, was taking a bath when government forces launched a surprise attack. Rushing naked to warn Ryoma, he was able to arm himself, fight off his attackers and escape. Obviously liking what he saw, Ryoma and Oryo were later married. They departed on what has been termed the “first honeymoon in Japan” from the inn. The inn does have an exhibit but there is no English information.

Following the road eastwards and around the corner from Teradaya Inn, you will find the lovely Fushimi Yume Hyakushu. The building dates from the early twentieth century and the decor has a sort-of 1940’s feel. There is a range of light snacks including items flavoured with sake such as sponge cake and ice cream. The attached gift shop sells sake (of course!), sweets and hand-painted postcards of the town.

This brewery, founded in 1637, is the most famous of Fushimi’s sake breweries. The building is very beautiful and can be viewed from both the canal and the street. Part of the complex has been converted into a museum. The museum has English explanations of the tools and processes involved in producing sake. The entry fee also covers sake-tasting and a small souvenir-sized bottle of sake. Great value!

See Gekkeikan’s website for further information on tasting and exhibits

A guide to the different brands of sake available in Fushimi town http://www.fushimi.or.jp/sake_guide/