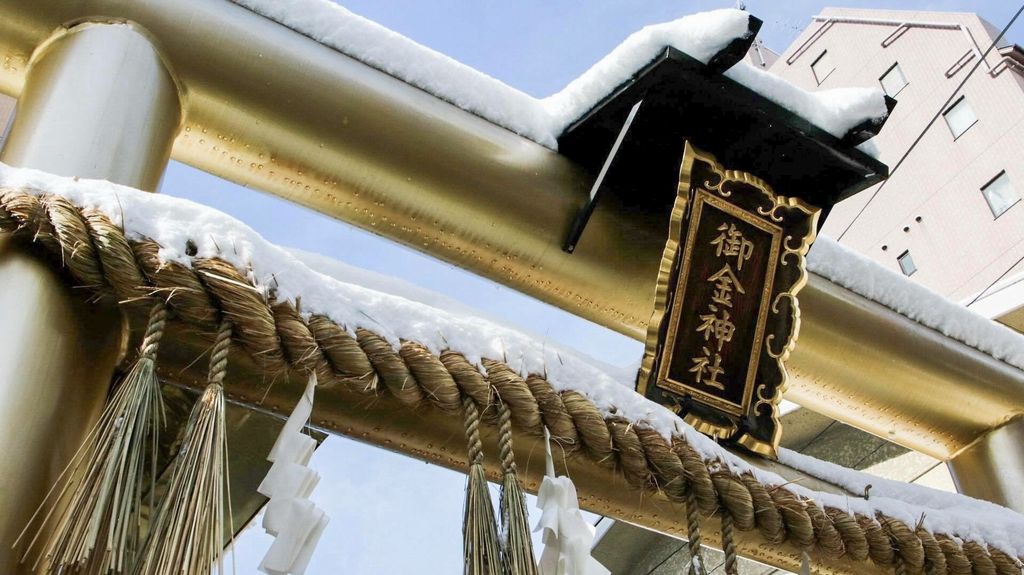 A deity of gold in Kyoto attracts people wishing for economic fortune.

Mikane Jinja Shrine 「御金神社」, located in the east of Nijo Castle, was established in 1883 as a private shrine and enshrines three deities Kanayamahiko no Mikoto, Amaterasu Omikami and Tsukuyomi no Kami.
Among them, Kanayamahiko no Mikoto is a deity of metal and metal machinery including swords, mirrors, agricultural implement.
When gold, silver and bronze are being used for currency, Mikane Jinja Shrine became famous as the god of economic fortune, because money is also made of metal.
The torii gate was originally wooden. It was collapsed by a typhoon, then remade in iron. The current torii gate was remade in gold in 2006 as the deity of gold.

Mikame Jinja Shrine stands out with its shining golden torii gate in the residential area with a row of houses.
After walking through the golden torii gate, at the Chozuya, the place to purify your hands with water, there is a strainer. You can also purify your coins with a strainer here.
At the main hall, you make a money offering with purified coins to the deity when you make wishes such as “ be richer” “win the lottery” . You can see the bell with its golden strap and it gives an atmosphere of being fortuitous with money.

Today, Mikane Jinja Shrine has been getting greater attention as a rare shrine that enshrines the deity of gold or money. There are a lot of worshippers as the precinct is open for 24 hours. you may feel like receiving a benefit by just looking at the gorgeous golden torii gate.
Many visitors also pin their hopes with a ema (votive horse tablets) on the big sacred ginkgo tree in the shrine’s grounds.